In 1916, Scholtens plan to build a “Krankzinningengesticht” (Psychiatric Hospital) in Central Java. Takes 7 years to convince the Dutch government that it deserves as a hospital, finally in 1923 inaugurated a Mental Hospital.

Mental Hospital Magelang is located 4 kilometers from the center of Magelang, on the edge of the highway that connects the cities of Yogyakarta, Semarang and Purworejo, surrounded by mountains Merapi, Merbabu, Andong and Telomoyo eastward, Ungaran in the north, Cleft and Menoreh west side and hill Tidar (“nail Java”) in the south.

The original is “Krankzinningengesticht Kramat”. After several changes in accordance with the time, both before and after independence, the name became “Mental Hospital Magelang”. Throughout the establishment of RSJ Magelang pretty much experiencing difficult times and events that bitter and alarming, including:

In 1930, when Mount Merapi erupted into tears, then some of the wards should be vacated to accommodate the victims of the Merapi eruption, but the effects are much damage to the building and equipment, even missing.

On April 22, 1942, all Dutch citizens labor, including its director dr. P.J. Stigter, was detained by the Japanese army, causing a void that disrupt the management of the Hospital. Hospital leaders during the era of Japan held by dr. Soeroyo.

In 1946-1950 Mental Hospital Magelang still shrouded atmosphere of uncertain function Psychiatric Hospital can not walk properly, some wards especially the front in these years been used for boarding TKR, Navy, Railways family shelter, where population displacement around the hospital.

It added that, Hygiene office had also located in Magelang Mental Hospital during this period Psychiatric Hospital Magelang sometimes not spared as the battlefield as well as the chaos. All these circumstances cause damage to buildings, destruction of plantations (coffee, sugar cane), the loss of the patient’s clothing, occupational therapy equipment and means of entertainment such as puppet and gamelan.

At the time of Trikora and Dwikora also quite noticeably in Magelang Mental Hospital as a result of austerity Budget. To the extent that the wards around the page needs to be planted with potatoes, beans, etc. For additional foodstuffs are also part of the land (coffee plantations) was taken over by the Defense and Security, so that from then on the original area 82 975 ha to 74 138 ha.

But then, in the presence of Repelita, state Psychiatric Hospital Magelang was gradually improved practically in all fields. However, there are not refundable as the original state, for example: Fisheries could not be implemented because the area of ??the Mental Hospital Magelang no longer be able to achieve adequate irrigation flow. In order Repelita RSJ Magelang got large areas of land for water supply 0.945 Ha. Previous clean water obtained from PAM Magelang but since the Japanese era is not running anymore.

In 1978 RSJ Magelang set by the Government as grade A Central RSJ by the Decree of the Minister of Health. 135 / Menkes / SK / IV / 1978. As a Technical Implementation Unit of the department of Health RSJ Magelang has the task of coordinating and implementing health services, prevention of mental disorders, recovery and rehabilitation in the field of mental health. 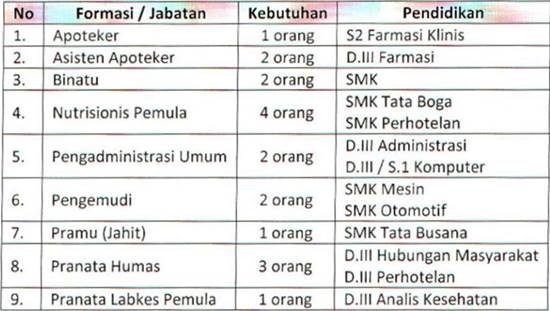 Application should contains the below documents :

Please send your all required documents above to :