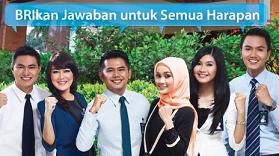 Bank Rakyat Indonesia ( BRI ) is one of the largest government -owned bank in Indonesia. At the beginning of Bank Rakyat Indonesia ( BRI ) was established in Purwokerto , Central Java by Raden Bei Aria Wirjaatmadja with the name De Poerwokertosche Hulp en Spaarbank der Inlandsche Hoofden or ” Help and Savings Bank Owned Priyayi The Navan ” , a financial institution that serves nationals Indonesian ( native ) . The agency was established on December 16, 1895 , which is then used as the birthday of BRI .

In the period after independence , based on Government Regulation no . 1 of 1946 Article 1 stated that BRI is the first state-owned banks in the Republic of Indonesia . In wartime maintain independence in 1948 , BRI was stopped for a while and just starting off again after the Renville agreement in 1949 to change its name to Bank Rakyat Indonesia States. At that time through No. PERPU . 41 was formed in 1960 Farmers and Fishermen Cooperative Bank ( BKTN ) which is a fusion of BRI , Bank Farmers and Fishermen and Nederlandsche Maatschappij ( NHM ) . Then based on Presidential Decree ( Presidential Decree ) No. . 9 In 1965, BKTN integrated into the name of Bank Indonesia Bank Indonesia Affairs Cooperative Farmers and Fishermen .

Since August 1, 1992 by the Banking Act No. . 7 of 1992 and Government Regulation No. . 21 1992 BRI status changed into a limited liability company . BRI ownership when it was still 100 % in the hands of the Government of the Republic of Indonesia . In 2003 , the Indonesian government decided to sell 30 % stake in the bank , so it became a public company with the official name of PT . Bank Rakyat Indonesia ( Persero ) Tbk . , Which is still used up to this time .

Until now Bank Rakyat Indonesia ( Persero ) established since 1895 remains consistent focus on service to small communities , including by providing credit facilities to a class of small entrepreneurs . This is partly reflected in the distribution of KUK ( Small Business Loan ) in 1994 amounted to Rp . 6419.8 billion which increased to Rp . 8231.1 billion in 1995 and in 1999 until September of Rp . 20 466 billion .

PT Bank Rakyat Indonesia (Persero) Tbk are seeking for suitably qualified and professional candidates to join as following positions to be stationed at Kanwil Malang :

Lowongan Kerja BRI Malang brougth to you by lokercpnsbumn.com