Given the role , function and contribution of SOEs to the state coffers significantly , in 1998 to 2000 , the Indonesian government organization builder and change shape into a ministry-level SOE managers . Early forms of organizational change into the ministry occurred in the reign of Development Cabinet VI , with the name of the Office of the State Minister of Investment and Development of SOE / SOE Chief Development Board .

Kementerian Badan Usaha Milik Negara seeks the best Indonesian Citizen who have high integrity and commitment to be a candidate for Civil Servants (CPNS) as : 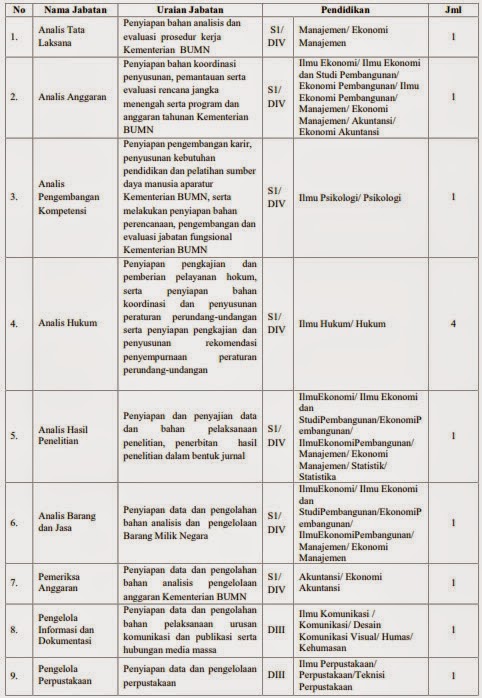 Placement of all employess on these positions is at the Office of Ministry of Enterprise, Central Jakarta.

Registration CPNS Ministry of Enterprise online for Fiscal Year 2014 began on August 20 sd 3 September 2014 via the website and www.sscn.bkn.go.id. www.panselnas.menpan.go.id

When charging is sure to fill out the form with correct and complete registration stuffing as directed. Error filling so that there is a discrepancy with the application file selection process resulted in failing administration.

Send the application file to the Chief Procurement Executive Team CPNS Ministry of Enterprise in 2014 by attaching:

The procedure for sending files is as follows:

Pinch all documents with a staple gun and insert the blue paper folder who has written code in the front office, then the application folder included in the brown envelope and write on the top left corner of the proposed position code. For applicants who choose more than 1 (one) position, write code proposed position based on the priority choices.

Application file is sent to the Executive Team Procurement CPNS Ministry of Enterprise (hereinafter referred to as Team) 2014 by registered mail starting on August 20, 2014 and ended on 3 September 2014 (postmark), and must be received no later than the team on September 5 2014, addressed to:

Applicants who passed the administrative selection will then be followed with a TKD Participant Card Exam (KPU). KPU pelamarmelalui email will be sent to applicants who used at the time of registration.

Applicants do KPU printing and attaching recent photograph with the same 4×6 size photograph submitted with the application file.

Location and schedule execution with system test TKD Computer Assisted Test (CAT) will be announced at the time of the announcement of the administration in the website www.bumn.go.id the third week of September 2014.

Lowongan CPNS Kementerian BUMN brougth to you by lokercpnsbumn.com