Universitas Andalas or Unand or Andalas University is a state university located in Padang, West Sumatera. The University is one of the oldest university in Indonesia. The University was established in 1955 and based by the Decree of the Minister of Education and Culture, no. 80016/Kab; 23 December 1955. Currently Universitas Andalas operated 12 Faculties, 1 graduate program and 2 polytechnics, with details of 49 undergraduate programs (S1), 29 master’s study programs (S2), 7 doctoral study program (S3) and 11 education program specialist. Since 2011, the University lead by Werry Darta Taifur. 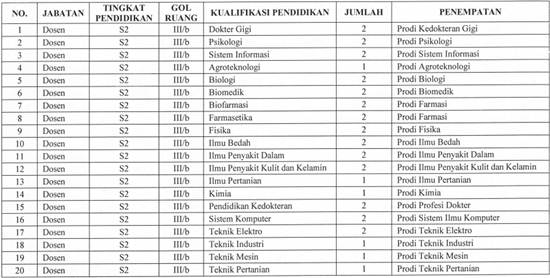 General requirements of the B 1 s.d. 8 shall be met by applicants who passed the selection test CPNS.

If the applicants who passed the selection test CPNS can not meet the general requirements and / or other requirements are specified, then the right to be proposed as CPNS for the candidates concerned. automatically canceled.